Human rights activist, Deji Adeyanju, has claimed that the group was offered N1m by government sympathizers not to hold today’s sit out against the continued detention of Omoyele Sowore.

Speaking at at the ongoing protest metres away from the DSS Headquarters at Aso Drive.

We will not compromise, if those who gave us the money don’t come and collect it back today, we will give it to Femi Falana SAN to defray Sowore’s legal costs.”

The protesters are currently conducting their protest peacefully under the watchful eyes of DSS operatives and soldiers from the nearby Guards Brigade.

The activists are currently protesting the continued detention of the pro-democracy activists, Omoyele Sowore and Olawale Bakare despite a second court order granting their release.

The Department of State Services has trying to infiltrate the ranks of Nigerian journalists covering the ongoing #OcuppyDSS protest in Abuja, SaharaReporters can confirm.

Ahead of the protest by activists and civil society organizations at the headquarters of the DSS today (Tuesday), the agency had beefed up security around its facility. 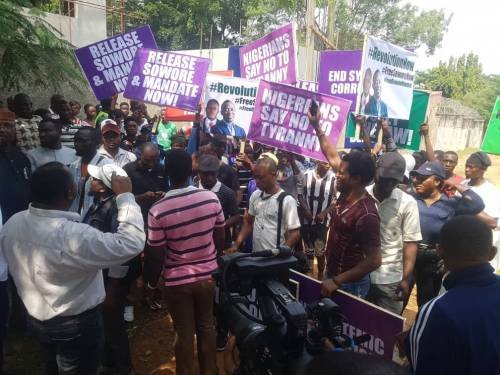 A human rights lawyer, Femi Falana, on Sunday raised the alarm on a plan by the DSS to file a fresh charge against Sowore in a bid to keep him in detention indefinitely.

The DSS had prevented activists, lawyers, and families, who came out on Saturday morning to receive Sowore and Bakare following a statement by the agency’s spokesman, Peter Afunanya.

Sowore has spent 101 days in detention since he was kidnapped from his hotel apartment on August 3, 2019, despite two court orders granting his release.

"Should We Give Up Because The Government Is Stronger Than The People" – @adeyanjudeji pic.twitter.com/5eL0jKe3p1